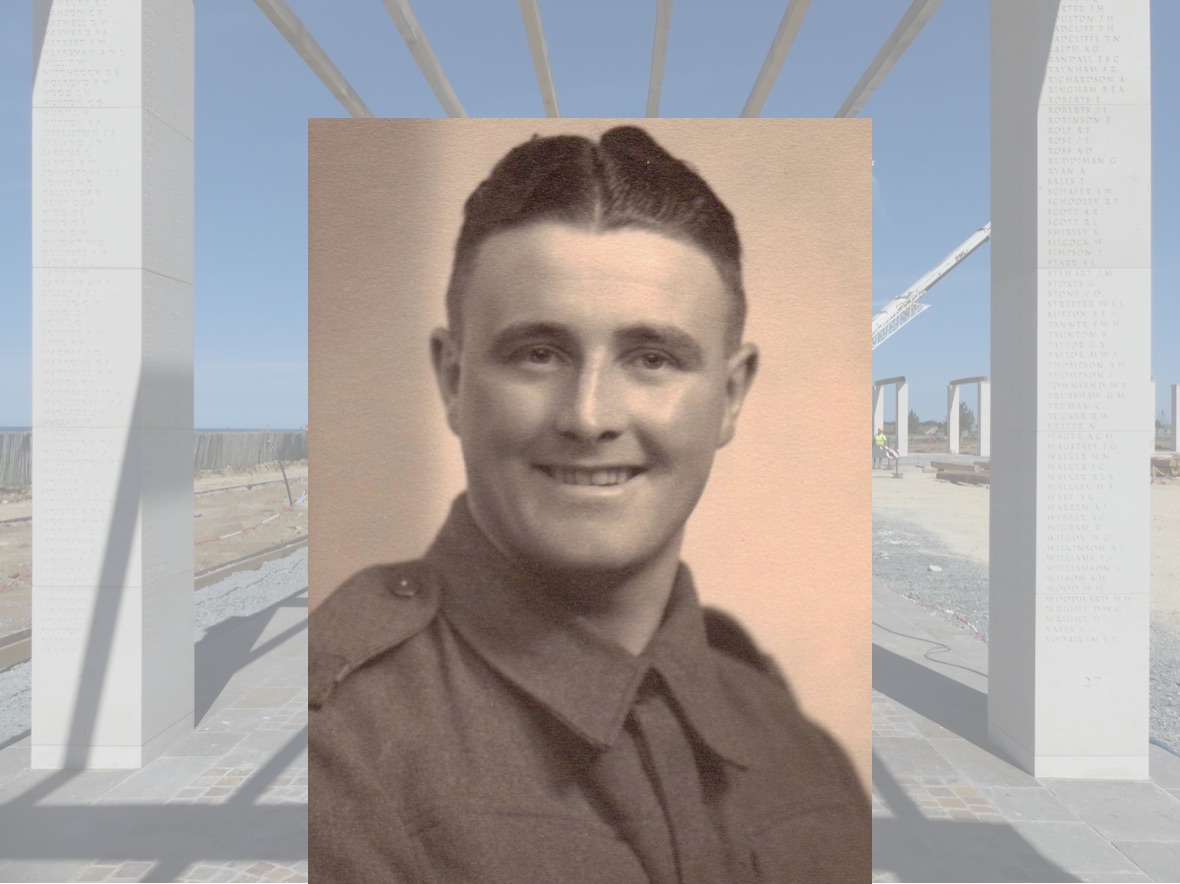 The Story Of Private George Hanks

The story and photographs below have been published by the Trust with kind permission from Paul Harris, the grandson of George, and his family.

My grandfather, Private George Hanks of the 10th Battalion Highland Light Infantry (HLI), fell aged 30 on 7 August 1944 during Operation Bluecoat. As the Germans retreated in early August 1944 a concave semi-circle formed around the tiny agricultural commune, Estry. It had become a fortress where over 450 people would die during intense house-to-house fighting. It was a particularly nasty battle.

After fighting through June, July and into August, the HLI would have been exhausted. By now George would be battle-hardened. Amongst the smoke, fury and exploding tanks only George and his company (who were reduced to the size of a platoon) fought their way as far as the south side of the crossroads. There they dug in on the newly won ground; a small orchard beside the main road containing a stone farm building and some cottages.

Just after midnight on 7 August and under the orders of Hitler himself, the enemy opened fire with artillery searching the orchard with remarkable accuracy. Here George fell after being hit by a mortar. 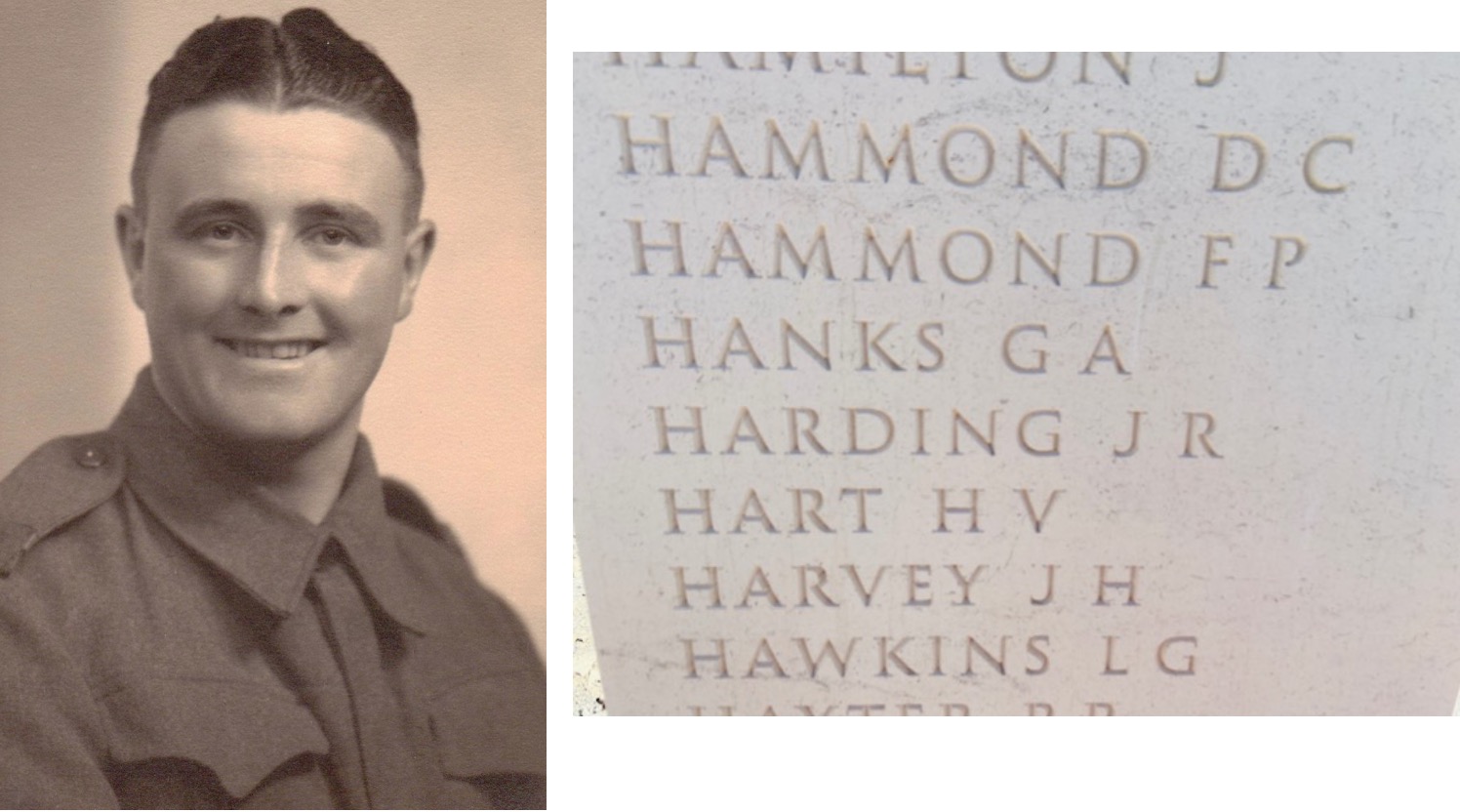 In 2015, my mother gave me the love letters George had written to my grandmother during his time in France. With each letter he asks for a picture of his baby girl, Rosemary – my mother. He finally received the photo a day before he was killed at Estry as the Germans made one last counter-attack under the orders of Hitler himself. My mother had just turned one when her father died, so although they met, she has no memory of him. I like to think George died holding that picture. After George’s tragic passing, my Granny Hilda (called by her middle name, Eileen, by my grandfather) never cried again for the rest of her life. She passed away aged 92 in 2008. She was an incredibly strong and feisty woman. 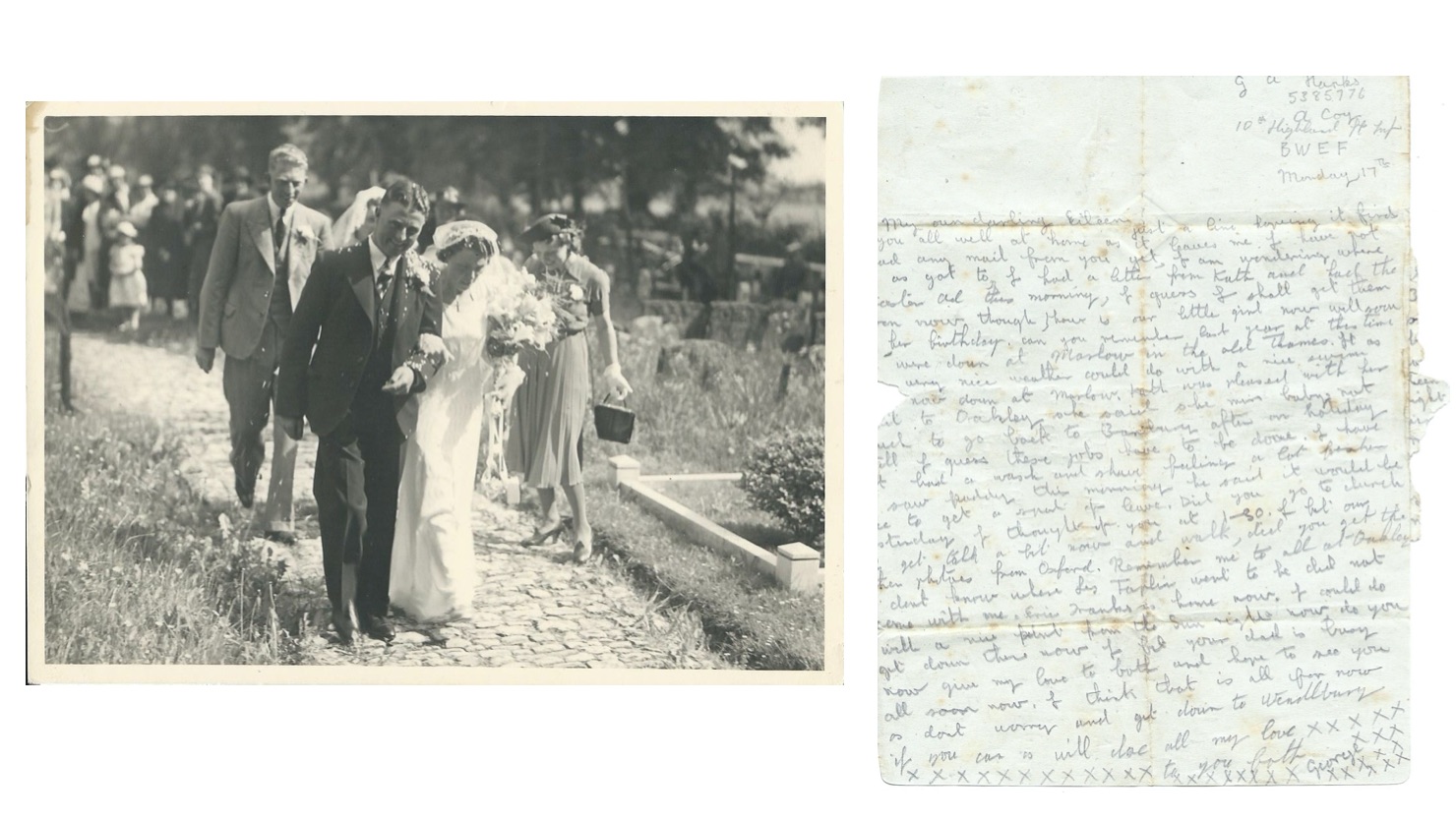 I have transcribed George’s letter pictured above, dated 17 July 1944:

My own darling Eileen,

Just a line hoping it finds you all well at home as it leaves me. I have not have not had any mail from you yet, I am wondering where it has got to. I had a letter from Kath [George’s sister] and had the Bicester Ad [local paper] this morning, I guess I shall get them from now, though how is our little girl now, will soon be her birthday.

Can you remember last year at this time we were down at Marlow in the old Thames? It is some very nice weather could do with a nice swim now down at Marlow.

Kath was pleased with her recent visit to Oakley [Bucks village where George and Eileen lived]. She said she missed baby, not much to go back to Banbury after on holiday, still I guess these jobs have to be done [Kath was a maid working at a house in Banbury].

I have had a wash and a shave. Feeling a lot fresher. I saw Paddy this morning, he said it would be nice to get a spot of leave. Did you go to church yesterday? I thought of you at 1:30.

I bet our R [Rosemary is] get[ting to] talk a bit now and walk, did you get the other photos from Oxford?

Remember me to all at Oakley. I don’t know where Les Tapin went to be, did not come with me. Eric Franks is home now.

I could do with a nice pint from The Sun [pub in Oakley which closed in 1961] right now, do you get down there now if your dad is busy? Now give my love to both and hope to see you all soon. I think that is all for now so don’t worry and get down to Wendlebury [village where George’s parents lived] if you can as well.

All my love to you both

His handwriting is dreadful and the letters are starting to show their age. The one above was written a few days before my mother’s first birthday. The date of the letter tells me the 10th Battalion HLI were about to move to Caumont to relieve the American 51st Division until 30 July, at which point the HLI would have been positioned at the most forward point of the British frontline.

Through the letters passed on by my mother, I began searching through military records and historical books, charting day-by-day where he was as a novice soldier thrown into combat against some of the most battle hardened professional Nazi opponents.

The research became my own personal mission to unlock the past, so much so that I tracked down the exact spot where my grandfather fell.  With the help of some local knowledge, I was able to find the then little French boy who had tended my grandfather’s temporary grave for three years until it was moved to the St Charles de Percy Commonwealth War Graves Cemetery.

In April 2016, I drove down a Norman dirt track to find waiting patiently for my mother and my family was the man that had looked after my grandfather over 70 years ago. Although now in his eighties, Monsieur Albert Prunier stood tall, proudly guarding the very spot where my grandfather George had lay on his family farm. 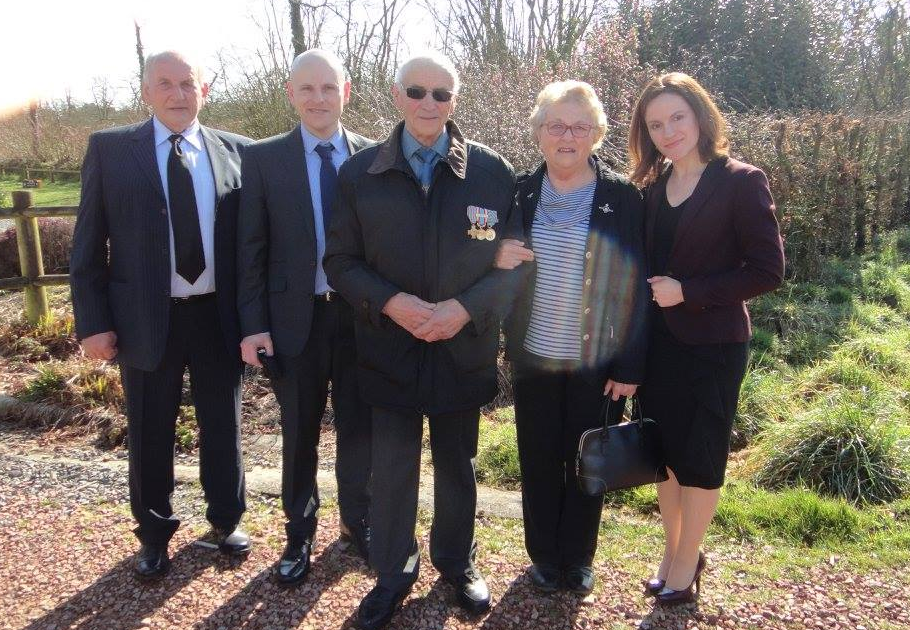 Mum was greatly comforted by the meeting with Albert. Although she had always wanted his body repatriated, speaking to Albert finally gave her closure and reassurance that her father was being looked after by the good people of Normandy.

In all the years after the summer of 1944, nobody from the families of those killed had been in any kind of dialogue with the people of Estry – thanks to email contact, I became the first. The people of Estry were so delighted that they adopted George as their own soldier. His picture now hangs in their Mairie (town hall) next to that of President Macron. 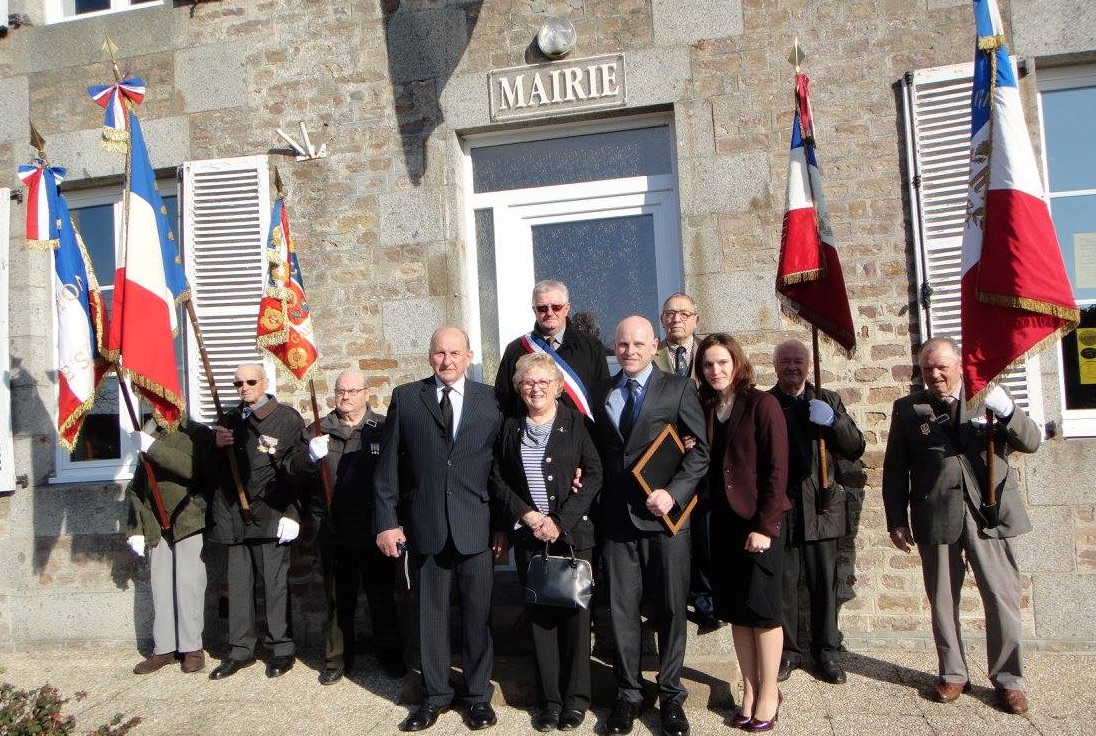 The adoption ceremony in Estry, April 2016. Albert is pictured second from left, with Rosemary in the centre and son Paul next to her.

Three years later, whilst carrying out further research in Normandy, I was informed that Albert had recently passed away. By pure coincidence I found myself laying flowers on his grave on 7 August 2019, exactly 75 years to the day that he had begun laying flowers on my grandfather’s grave. 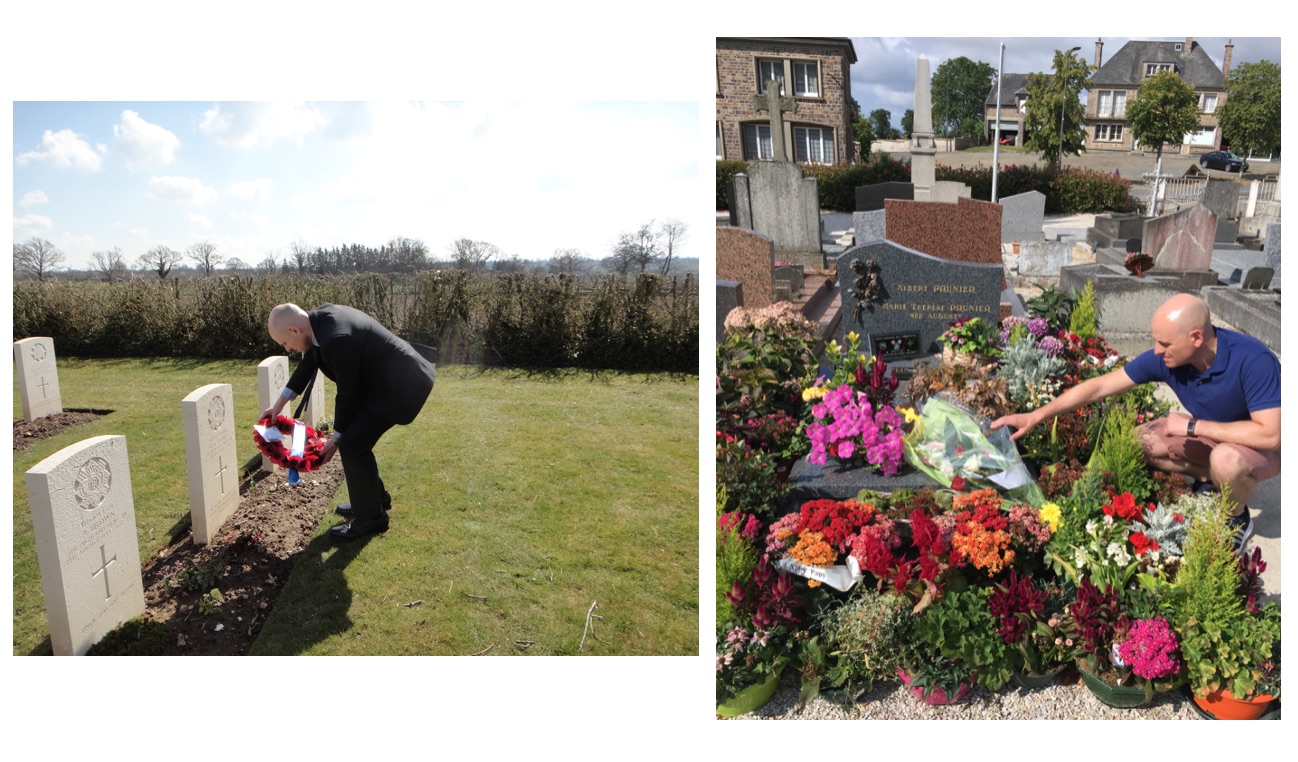 Left to right – Paul visiting George’s grave in 2016, and the grave of Albert Prunier on 7 August 2019, coinciding with the 75th anniversary of his grandfather’s passing.

After Albert’s passing, I contacted his daughter to tell her what Albert had meant to my family. This gave her the comfort that Albert had afforded us and, as such, our families are forever bonded by the historic events of 1944.

I am immensely proud of my grandfather I never met and have become a ‘Guardian’ of the British Normandy Memorial in his honour.