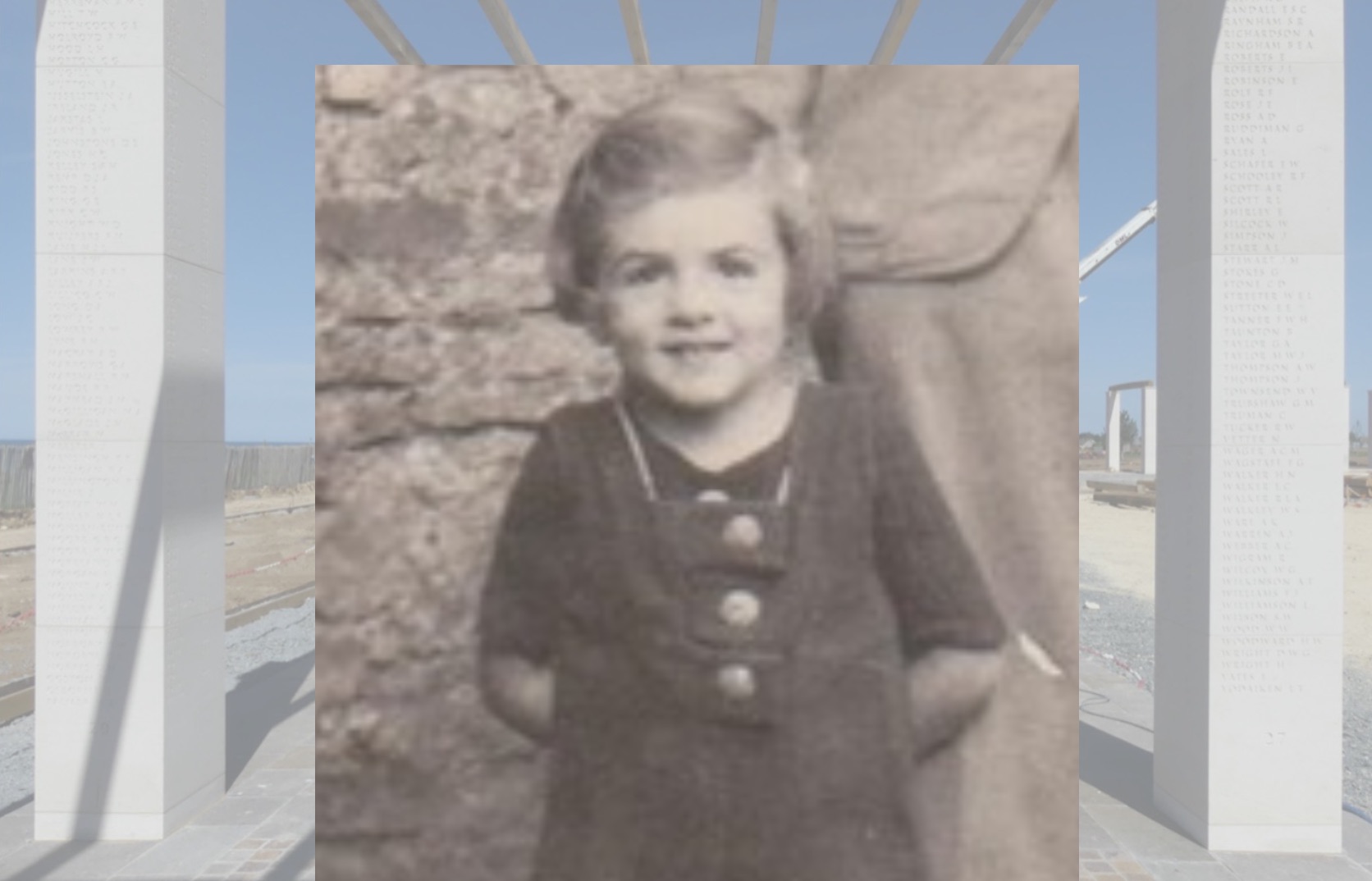 Memories of Life As a French civilian in summer 1944

Erik Langlinay is a 52-year-old History Teacher living in Rouen, Normandy. Erik shares the memories of his late mother, Claudine Lefèvre, who experienced the summer of 1944 as an eight-year-old living in Avenay-sur-Orne. He also tells the story of how he came to meet Harry Salmon, son of one of the 22,442, who has recently completed a fundraising bike ride for the Trust.

This is the first time the Trust is telling the story of a French civilian and we are so grateful to Erik and his family for allowing us to share these words.

My mother Claudine lived in Avenay-sur-Orne with her ten-year-old sister and her parents (my grandparents) who were both school teachers. Her father was a prisoner at the time in Oflag IIB camp in occupied Poland. My great-grandmother had a small farm nearby and my grandmother also worked at the Town Hall. She passed messages to the French Resistence, which could have resulted in her ending up in a concentration camp. The family lived in a presbytery of a church and were forced to house German soldiers in their own home. They didn’t want to speak to the Germans – they refused any contact with the invaders. My mother described it as “four years of fear.” 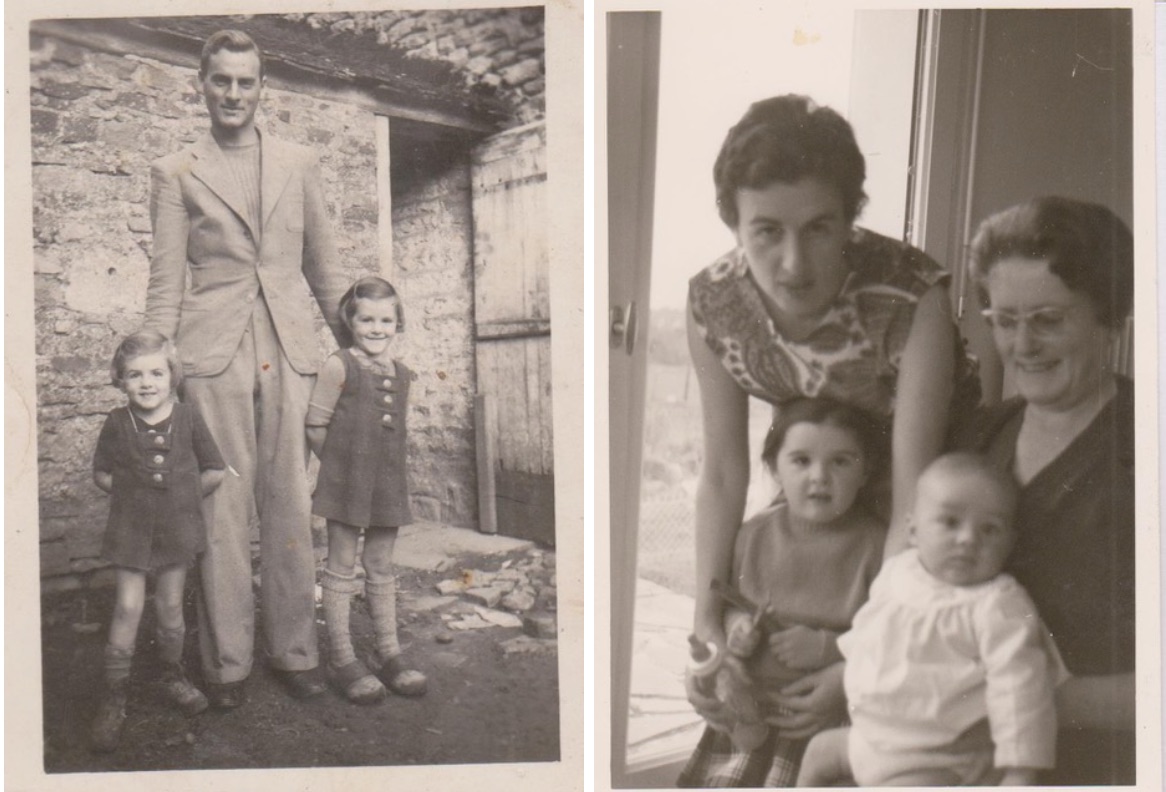 Claudine (left) with her father and sister, circa 1938, and Claudine with her mother (my grandmother) and her children.

On 6 June 1944, my grandmother roused her daughters exclaiming, “Wake up girls, the Landings have started.” She remembered the RAF bombing of Evrecy on 14 and 15 June. The British Army had located a group of tanks and the city was destroyed. Sadly, about 130 civilians were killed. My mother called it “the apocalypse”. In total, about 20,000 French civilians died in Normandy that summer.

On 25 or 26 June, my mother and her family escaped when the British Army attacked Hill 112. Field Marshall Montgomery attacked a large concentration of German troops; it was known as Operation Epsom. My mother’s family was forced to evacuate the village by the Germans – they had to crawl on the ground.

The family escaped death several times. War was a subject of discussion at every family gathering. At one point, they were refugees living in a farm. The Nazis arrived in a tank, gathered the farmers and the refugees – they though they were going to be shot. The soldiers took all their food and left. Another time they were stuck in a village where the fighting was so intense they could not leave. They hid in parts of the house with thick walls – I have no idea how they escaped. In contrast, my mother had very happy memories of VE Day. “Listen to the bells, girls, this is the end of the war”, said my grandmother. Although my mother remained traumatised by her experience of war (she was afraid of the sound of aeroplanes at night well into her 50s) she was lucky enough to raise a family and found joy and fulfilment in creating art.

After the passing of my mother in March 2017, my interest in this period of history increased further I felt a unity between the family graves, the landscape and the Allied cemetaries across Normandy – they are all part of the same history.

I found out about Harry Salmon’s fundraising cycle ride through the Trust’s website, which I enjoy visiting to read the stories behind the names on the Memorial. When I discovered his story, I felt that there had been “a life for a life” and nothing could had been possible without the Allied Forces in Normandy. Since then, I have been placing flowers on the graves of the Allied fallen, a well as of our family.

I located the place where Sgt. Harry Salmon was buried. It was about 15km from where my mother was living in the summer of 1944. Via the Trust, I was able to make direct contact with Harry and on 6 June 2020 I placed flowers on his father’s grave (Sgt. Harry Salmon). 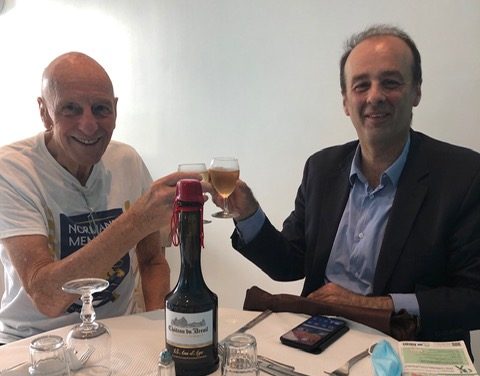 Then, later in the summer I met Harry and his wife Caroline at Duclair and offered them flowers and Calvados. That is what local people traditionally used to offer to soldiers. Harry showed great courage making a difficult trip to France in honour of his father. I have a lot of respect for him.

Honouring Sgt. Salmon’s grave and Harry and Caroline Salmon at their meeting with Erik

As a history teacher, my role is to educate the younger generations, as well as carrying out my own research. At school, we reflect on what war and peace really mean, learn about the people of the tine, the Holocaust and we also organise trips to museums and abroad.

In August 2019, I returned to live in my parents’ home in Normandy. I feel like the Allied soldiers still live among us. “Je me souviens”.