The memorial will honour the more than 22,000 soldiers, sailors, marines and airmen who died fighting under British command during D-Day and the Battle of Normandy.

It has been designed by British architect Liam O’Connor and features a significant landscape setting with a central ‘memorial court’ and a ‘cloister garden’ formed by stone piers onto which the names of those who died will be inscribed.

A “D-Day Sculpture” by British sculptor David Williams-Ellis has been commissioned by the Trust and will be one of the centre-pieces of the memorial park’s official inauguration.

The memorial will stand on a commanding site overlooking ‘Gold Beach’ near the town of Ver-sur-Mer. It was along this coastline that thousands of troops under British command landed on 6th June 1944. The Ver-sur-Mer site was the overwhelming choice of veterans consulted by the Trust.

The task of compiling the Roll of Honour of names for inscription on the British Normandy Memorial has been an original piece of historical research undertaken by the trust. The names of all those who lost their lives under British command on D-Day and during the Battle of Normandy have never, until now, been brought together.

The Trust has been seeking to realise the dream of D-Day Veteran George Batts for Britain finally to have its own national memorial. In March 2017 the Trust secured a commitment from the UK Government to provide core finance for the memorial from the LIBOR fund.

The trust is cooperating closely with the French planning authorities to secure the necessary building permissions for the memorial. As soon as these are in place, the Trust will begin work on the site, with the aim of making as much progress as possible for the 75th anniversary of D-Day on 6 June 2019.

In a Foreword to the Trust’s brochure, the Prince of Wales has described the British Normandy Memorial as “long overdue”. He says the memorial will provide a place where visitors will be able to “reflect on what we owe to all those who so gallantly carried out their duty with such extraordinary selflessness and resolve.”

Today the Trust also launches a fundraising campaign to assist with the completion of the memorial and the wider project to ensure that Britain’s sacrifice on D-Day and in the Battle of Normandy is never forgotten. Among the Trust’s plans are the development of educational facilities so generations of the future can understand the profound significance of the United Kingdom’s contribution to securing Europe’s freedoms.

Trust Patron, D-Day veteran George Batts MBE Leg d’Hon, said: “The British government has given us a fantastic start in funding terms – but to deliver the complete memorial project to match those of other nations we will need to go further. It is my greatest wish and that of other Veterans to see this project completed in our lifetimes. If the remembrance of what was done on the D-Day beaches matters to you we would be so grateful for your support.”

Chairman of the Normandy Memorial Trust, Lord Peter Ricketts, said: “As British Ambassador to France, I saw at first hand the extraordinary level of interest every year in the commemorations of the Battle of Normandy. The determination of the Veterans to be present, and to salute the memory of fallen comrades, was deeply moving. So too was the fact that growing numbers of young people of many nationalities came to learn of the courage and sacrifice of those who fought for the liberation of Normandy, and of the suffering of French civilians. When I learned of the proposal from the Veteran community for a British national memorial, I was convinced that this was the way to help future generations understand the scale of the sacrifice, and the values at stake in the Battle of Normandy.” 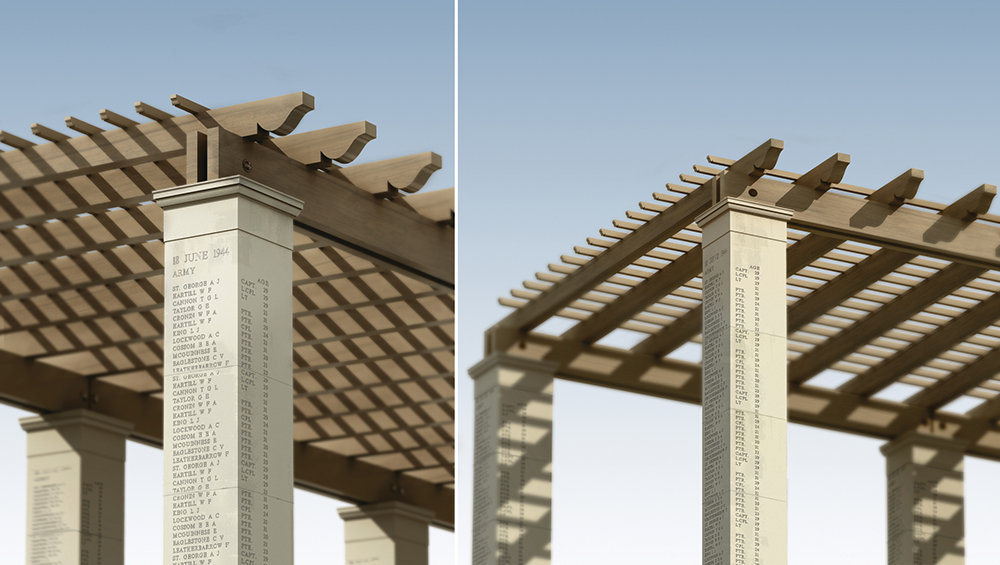 The Secretary of State for Defence, The Rt. Hon Gavin Williamson MP said: “I am delighted to be lending my wholehearted support to this important project, to establish the British Normandy Memorial. It is a remarkable thing that there is no single British memorial which brings together the names of all those who made the ultimate sacrifice in Normandy in the summer of 1944. It is time that omission was corrected before the last of those indomitable Veterans of Normandy have departed. I commend this project to you and hope, if you can, you will support it.”

The British Normandy Memorial architect Liam O’Connor said: “My hope and belief is that this stone memorial in this carefully landscaped setting will create a compelling place of beauty. It will be a place where, for many generations to come, people will be able to come to remember and reflect.”

At the United Kingdom-France summit at Sandhurst in January 2018, President Emmanuel Macron and Prime Minister Theresa May committed to attending the inauguration of the project in June 2019 as part of the commemorations to mark the 75th Anniversary of D-Day and the Normandy Campaign.

Go here to find out more about our fundraising campaign and to donate.